Sunglasses is the ultimate accessory that fits all types of styles, either casual, sport, business or trendy fit. But this is not the only reason why sunglasses are an important part of our lives.

Protect your eyes with sunglasses

Sunglasses is primarily used as eye protection. UV-radiation and a bright sun are not only uncomfortable but can also damage the eyes in several ways. Thypical eye diseases that kan be cause be the sunlight is cataracts, snow blindness and several types of cancer. In Europe the recommendation is that the sunglasses filter out at least 95% of UVA- and UVB radiation. This is an indicator showing how damaging it can be to stay in the sun for extended periods, without sunglasses to protect the eyes.

Sunglasses in a premodern context.

The need to protect the eyes have existed for a long time, even before we knew about the medical implications of not using sunglasses. The precursors to sunglasses include snow goggles made of wood, walrus ivory, caribou antler, bone, or even seashore grass, used by the inuit population in North America and Greenland. Another example is colored glass mixed with quarts that archaeologists attribute to the 11th century China.

Sunglasses is one of the coolest fashion statements you can wear as an accessory. Movie stars were the first to popularize sunglasses in the early 1920s, and ever after the trend have stuck in all different countries and cultures around the world. Nowadays it might seem unthinkable for a lot of people not using their sunglasses even indoors or after the sun have set.

The first type of sunglasses to really set the trend were the Wayfarer style. This became a fashion icon developed by Bausch and Lomb, via their subsidiary Ray-Ban. Wayfarers hit the market in the 1950s and haven’t changed much since then. In fact, we have a bunch of them in our store that use the original wayfarers as inspiration.

Aviator sunglasses are also worth a mention because this type is probably equally as popular, and the basic design haven’t changed much either. Reason for this is that excellent design doesn’t get colored by time, and why change a winning recipe? The popular aviators also have a practical use professionally, amongst real life pilots and they were designed for this (also by Bausch and Lomb) for this particular use in the US Air Force. The closeness to this environment probably settled with a broader presence in the public mind through the film industry, and Top Gun in particular (with Tom cruise as the main actor), one of the most popular movies of all time.

It’s not only the movie stars that pave way for new trends. The rich and equally famous have their say too. Let us use oversized sunglasses as an example, that became popular because of Jacqueline Kennedy Onassis, that used them not to be noticed but rather the opposite. Sunglasses are namely particularly loved by celebrities because they hide parts of the face something that might make it harder to be recognized by crazy fans. Oversized sunglasses are cool sunglasses and we have different colors and designs in stock. Also used to minimize other features and are popularly used by persons that think their nose is too big, as an example.

It would be fair to say that the number of cool sunglasses equal the amount of celebrities in the world at any given time. Rock stars and artists in all genres, more than often set new trends with sunglasses that become an integral part of the image itself. Let’s take John Lennon as an example with his iconic round sunglasses. Variants of these are equally as contemporary and trendy today as they were fifty years ago. Movies like the all-time classic Blues Brothers also did its fair share of trendsetting. Today, we barely know the eye color of some stars, like Snoop Dog – you won’t get to see his eyes often!

Sunglasses for every occasion

Some (or all) people like to look fashionable, in some form or another, and most trendy fashionistas have at least a couple of sunglasses available at any given time and update their rack when the trends change. Sunglasses for sports have a use that is important for many, men those sunglasses don’t necessarily look cool at the outdoor restaurant. Some styles also are interconnected with certain subcultures like the wayfarer. Wayfarer sunglasses are typically used at the beach or onboard a sailing boat set for unknown harbors. A sport summer outfit isn’t complete before the sunglasses are present!

The lens (or glass) in sunglasses comes in different materials, shapes and color. The most important for you, is to use sunglasses that give you the protection you are promised. Complications caused by sun damage should not be taken lightly, because this type of damage might cause permanent, severe damage.

The material is also important. If you like the outdoors, like trekking or sailing, you probably wear sunglasses all the time. That is a reason to check your sunglasses for nickel or other allergy inducing materials. Fortunately, all the sunglasses you find here from Brillz are free of nickel. Furthermore, the sunglasses should be made of lighter materials, so they do not feel heavy, and choose a pair that are comfortable. Sunglasses made of poor materials often change their shape quickly and thus slips from the nose (yeah, its annoying).

Okay, so now you got a crash course in sunglasses but stop wasting your precious eyes on the screen – now it is time to check out the store, get yourself some sunglasses and enjoy the outdoors! 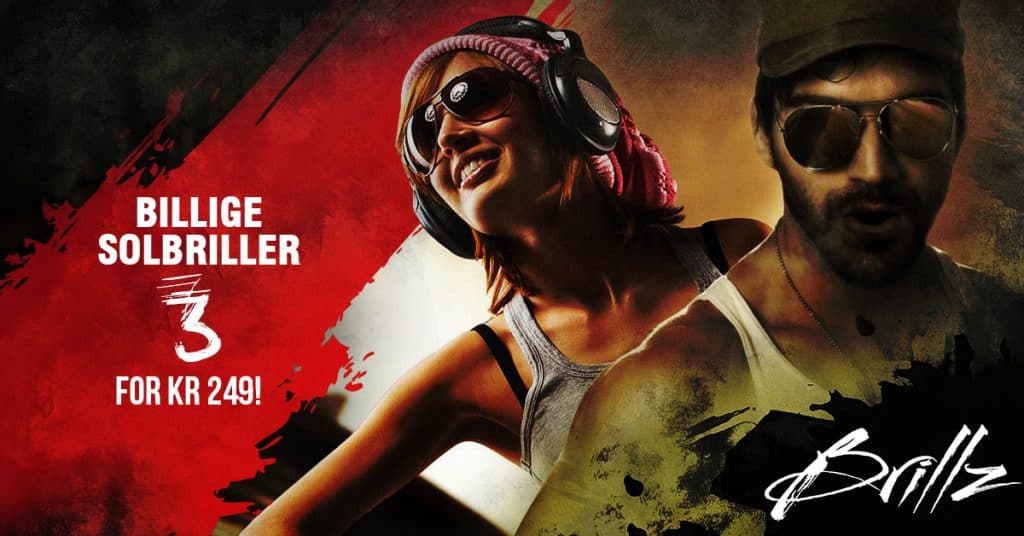 Brillz sunglasses are a window to the world and with contemporary, cool and trendy sunglasses you can create your own identity and greet the world with style. Brillz probably has the best deal you can find online and we are proud of that. Check out our huge catalog of high quality sunglasses and get great discounts on your next purchase!

Brillz has a vision of revolutionizing the market by offering the largest range of sunglasses, the coolest styles, colors and high quality materials, at low prices. We are physically located in Norway and have an online presence in all countries throughout Europe. Take part in the Brillz Revolution and purchase cool sunglasses for every occasion!

We’d love to hear from you! Please fill our contact form and we answer you as soon as possible! We recommend you to see our FAQ for general questions, as it might save you some time. We also made a page dedicated to delivery, a page for returns, and one solely about us. We also have you covered if you are concerned about your privacy or our terms. Lastly you might want to know some facts about sunglasses! We also got something interesting to say if you are interested in B2B or you have a blog.